When it comes to bad habits, I could say I’ll probably win a lot of awards. Of all my bad habits the hardest that I had to overcome was to stop smoking and secondly would be to start exercising.

I’ve started smoking when I was 14 and by the time I stopped I was 45. Well, looking back it’s been over 10 years and counting since I lit a cigarette. And when I sit back and think, I wonder in amazement that I haven’t smoked these past years.

But again, it’s easy for me to say this now. However, in hindsight, I do realize that no matter what I would have tried back then I would have failed. Only because what I know now by recalling how the cause, effect and the catalyst which had led me to finally stop smoking.

Eventually, I had just about enough when the politicians (Government) started justifying why they raised cigarette prices. They wanted me to believe they cared about the health of the smokers and it wasn’t about the money. It was not about the billions which would be saved for and from health care when smokers quit. And the billions made through cigarette taxes if smokers continue to smoke. So, either which way it’s a win-win for the government.

If the government is going to save and make money from me, by me stop smoking than fine. But to make money from me while I’m killing myself by smoking, well that’s a “no-no”. I wanted the satisfaction of seeing me quit smoking to improve my health and prolong my life for me. And, as a result, if the government is going to gain and profit from my action than good for them.

Sometimes you just have to let them win and have them knock the chip off your shoulder. That’s how the government shows love in a loving condescending way.

The following bad habit that I had to overcome, not exercising, was also a choice that was made for me.

My kids wanted a dog for the longest of time. And being first-time dog owners, prior to adopting our family readied ourselves by watching, reading and studying Cesar Millan and other dog trainers to better prepare and educate ourselves.

A good year later we adopted an 8 months old Doberman Pinscher through a shelter who knew an elderly man who recently had a heart attack and was recovering. He no longer could care for the dog due to his condition.

The very first day when we met our dog (Bucky) we sensed his high energy but we thought Bucky was still a puppy and hoped he’ll grow out of it. For those of you that are not familiar with high energy dogs like our dog. Well, be warned because these dogs need some form of exercise to release their pent-up energy. Otherwise, they will bark, whine, dig, pee, chew and/or express some other form of annoying behavior excessively. 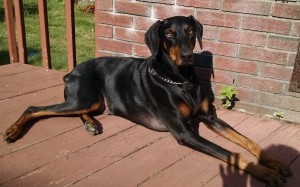 Well, it’s been 5 years and Bucky is still the same plus he has high prey drive toward animals and especially with squirrels. No one in the family except for me could handle him when he sees an animal around and there are plenty where we live.

I’m 5’7″ and before I stopped smoking my weight averaged 135-140 lbs and after I quit smoking I gained weight to an average of 155-160 lbs. Since hiking with Bucky for the first 3 years, I averaged 140-145 lbs and then gained some weight only hiking once a day.

Exercise is addictive when you’re doing something every day and now for the past 1 1/2 years, I’ve added a total workout program.

As you can see from my experience breaking these bad habits was unforeseen. The fact that it was mostly out of my control and I’ve not planned it out astounds me. I’m equally surprised by how I’m still sustaining the good habit for so long. I could truly say these two bad obstacles I’ve overcome stands out over other well thought out accomplishments.

After these experiences, I try to make a mental note on how I need to keep an opened mind.

Update: It’s been another three (3) years past. I’m still continuing the hike with Bucky and as well as the morning exercise schedule and routine. Bucky is nine (9) years old but still energetic with unceasing prey drive. I’m now 54 years old and maintaining by weight of 145-150 lbs but thankfully more muscles than fat.

Thanks for reading this page and sharing your time with me. Don’t forget to leave me a comment or a question and I’ll be more than happy to hear from you.

P.S. Food for thought: There was a man with a dog and this dog was sitting on the porch moaning and groaning all day for as long as the owner had him. One day a neighbor asked, “Why is your dog moaning and groaning every day?” And the owner answered, “Because he’s sitting on a nail.” So the neighbor asked, “Why doesn’t he get off?” And the owner replied, “Because it’s not hurting bad enough.”

2 thoughts on “How To Change Life For The Better”